In Part 1 we discovered that "double 'ose Stefan" Dawson is not only a secret agent but also an independent record producer building brands and growing bands like Starstika, Riotakt and MC 4Star (Parental advisory : Explicit lyrics). Bloke, as this Textpattern creative is known on the forum, didn't mention he made a couple of music videos, wrote a novel and is planning a TV series and film. He's possibly a fashion guru too but in this final part of the interview he talks mostly about TXP. Enjoy!

TXPQ What is your involvement with the Meatrix?

SD Nothing past the fact I thought it was a brilliantly conceived and well put together web site. As an organic believer, I think we all owe it to the planet to check it out. Just don't eat immediately prior to viewing. 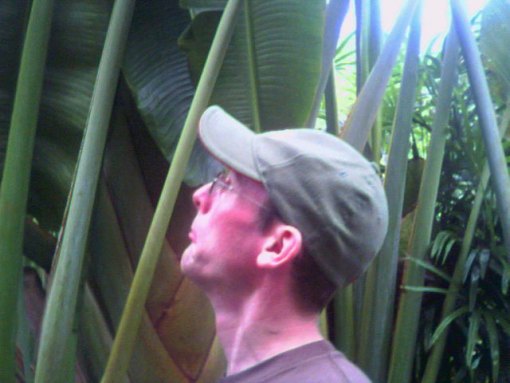 SD I ignore TV because it's largely an evil medium. I will be the only person in the country without a digital TV tuner when analog is switched off, thus confounding both the government and TV Licencing organisations who will hound me for the rest of eternity out of disbelief.

I have, however, been known to enjoy (on DVD/download) the X-Files, Scrubs, Family Guy, Reaper and Heroes.

I adore film. It's one of my escapisms when I want to be taken on a journey and be drawn into another world. Sadly, too many overly effects-laden films have sacrificed story for action set-pieces and shoddy writing. I hereby pledge my screenplay won't do that.

TXPQ Would you like to say anything about your journey through life so far?

SD Because, for the most part, it's elegant, lightweight and is very chameleonic (is that even a word?). To date, the number of situations I've put it in where it can't cope are countable on the fingers of one finger. And that was probably my lack of understanding/ingenuity rather than any technical barrier.

TXPQ How does Textpattern compare with other CMSs you've used?

SD Every tool has its niche and its plus points. I don't think one tool can ever hope to do it all, despite the best attempts by Micro$oft to prove otherwise.

TXPQ Do you use many plugins?

SD My own ones, fairly heavily <grin>. Other must-haves are rss_admin_db_manager, rss_auto_excerpt, rvm_maintenance, rvm_css, the zem_contact_reborn suite, ied_plugin_composer, sed_copyright, and upm_savenew. MLP is also a fantastic feat of engineering and would be more important in my life if I knew someone who could translate my random scribblings to other languages.

TXPQ Which plugin you've made are you most chuffed about?

SD Probably a toss-up between smd_if and smd_gallery, even though the latter hasn't been through the rloaderro and mrdale proving ground yet. I reserve the right to revoke my love for it if it turns out to be as good at its job as Dubya.

The latest bunch are immensely powerful once you start to play, but should be considered a last-ditch attempt, mainly because they assume you know what you're doing. Also, as many have pointed out, but masa summed up beautifully: my documentation "reads like the manual of a Klingon Battle Cruiser". Best description I've heard in ages; laughed my legs off!

BTW, smd_remote_file takes the Bronze simply because it means I can leech bandwidth off someone else without paying for it :-P

TXPQ Anything more you'd like to say about web design, your sites, texpattern, plugins, coding, the txp forum, etc?

SD I wish I had an eye for style so I could show off some of my work. But I leave that to the professionals while I potter about with my middle-of-the-road tinkering.

On a rather random note, one thing I will say is never underestimate the power of washing dishes by hand. Being such a mind-numbingly tedious job, your head has plenty of time to freewheel; that's where most of my plugin ideas and schemes come from. People in this all-mod-cons age of ours might be tempted to stick the dishes in the machine and zap their synapses with alpha-wave inducing TV, missing out on such, otherwise quality, "brain time". Terrible waste.

So other than that and saying "don't believe what you hear on TV or in the newspapers" I think that's me done. Long live TXP and its future directions. Many thanks also to people like Peter who let weirdos like me say things in public, and to the amazing TextPattern community in general. There really is no finer Virtual place to hang out.

TXPQ It has been a real pleasure to be in touch with such a funny and creative Textpattern user! Stef Dawson, thank you very much.