One Breath and 4-Ever were pretty well inaccessible on small screen devices so I simply used the new default Textpattern CMS theme to rejig them.

4-Ever was inspired by Lilya 4-Ever which was a moving film that hit home deeply about issues such as human trafficking (slavery), sexual slavery, prostitution, drug use, poverty, violence, suicide, selfish parents, fear, religious promises etc. 4-Ever had online petitions but not many signed them and now the site is for information only. It is fairly close to the default TXP theme with not a lot of changes.

1breath.com tries to express the inexpressible through short simple observations. So there is even less “design” to get in the way of the content than most every other site, although I haven’t gone quite so far as Ruud! This is a stripped down version of Phil’s new default Textpattern theme. I discovered that the CSS3 gradients must use the full 6 numbers (#000000 and #222222) because using #000 and #222 shows up as blue in IE7! It was a lovely shade of blue but not the black I wanted, Mr Microsoft! 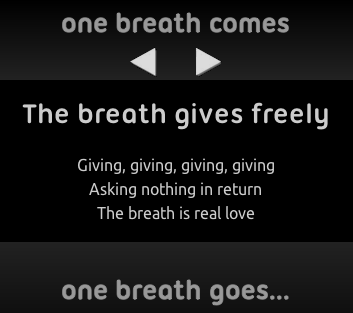