Gary Venter uses Textpattern and designs all sorts, especially for other architects and designers. He also gets his hands dirty building his love shack in Wellington, New Zealand.

GV That one has already been answered - the answer is 42.

Longer answer: I'm fascinated by design - not the fluffy stuff of trend and fashion, but how things work, and how this is reflected in how they look.

TXPQ Would you like to say anything about family, friends, lifestyle, where you live, hobbies, influences, favourite things etc?

GV Ingrid and myself are rarely apart/joined-at-the-hip - and we've been that way since the 80s. We're both home-bods and keep largely to ourselves - this includes our crazy family: Sputnik & Mies - two cantankerous Cornish/Devon Rex cats, and Baguette - a comically long-n-low doggie.

I'm a music nut (diverse tastes stretching from The Clash through to Kanye through to Ween to Muse. I'm a big fan of Aussie hip-hop). Hand-in-hand with the music comes my hi-fi - which used to be a stunningly high-end digital beast back in our apartment in Sydney, but has since reduced itself to something far simpler and smaller. As much as I enjoy audiophile equipment, it still only sounds as good as what you put into it, and most modern recordings suck.

We enjoy a modest art collection, mostly large abstract works on canvas. One of our favourites is "Tales of Lost Cities", a large steel & glass work by Helene Black, partner of Yiannis (who appears elsewhere on TXPQ, and is an old friend of ours from London (hey, Yiannis).

Looming large in my interests is Architecture - Built Meaning and all that Good Stuff. I'm of the school that believes that Modernism is not simply some past style - it is instead a methodology, a way of doing things, and as such is as relevant today as it ever was. Architectural heroes? Le Corbusier and Harry Seidler to start with.

I relax by reading science fiction and sketching ideas using pencil on paper. I also occasionally fire-up my old PS2 for a bit of white-knuckle, cathartic action (I enjoy driving games).

TXPQ Can you explain the rationale behind the all-sorts.biz home page? It does not fit everything important above the fold, puts the latest news at the bottom, does not have obvious navigation to About, Contact or Archives, does not have stunning colour graphics, uses the same font throughout and is mainly black and white with very little grey, but it is still my favourite web-designer's-own-site home page :)

The all-in-one approach also has a SEO advantage - Google generally gives a higher rank to keywords appearing on a homepage, to the best of my knowledge.

One font throughout? Yep: Helvetica, on its 50th anniversary...

GV To me there is not a huge distinction between the disciplines - they all involve attempts to tame complexity via technology at the service of a social need. I view them as flip-sides of the same coin, and so my transition from one to the other was easy.

You can blame my Macintosh.

Back in the 80s in London I was introduced to the Mac while working with Kasabov Associates, Architects and Product Designers. I was immediately attracted to it as a visualisation/mind-amplification tool. I found myself visualising all manner of things on the screen, largely at the service of Architectural & Product Design projects.

You're meant to learn from history, not repeat it Simultaneously whilst geeking-out on my Mac, I was becoming increasingly disillusioned with the profession of Architecture (as opposed to the discipline of Architecture, to which I remain totally sold). The 80s & 90s were largely a bleak time for many Architects - dressing up buildings in historicist pastiche was the big thing. I like my buildings to be of this time, thank-you: you're meant to learn from history, not repeat it. When everyone from city building authorities to your employer started requiring that you make things 'look old' to fit into their context, I spat the dummy and jumped into 'multimedia' in '95, joining Big Hand Asia Pacific (early but long dead multimedia pioneers in Sydney) and producing my first website under Netscape 1.

From there the progression was logical - I went solo and did all manner of digital projects to keep afloat, relying on word-of-mouth to get commissions. Twice winning 'Best Use of Multimedia' in the Australian Internet Awards helped spread the word a bit, too (the awards may sound like a big deal, but they were all fluff).

Ironically, I've somewhat turned full circle. In addition to all the web stuff, I'm practising Architecture again - both in the design (& construction) of our home-studio/shack in New Zealand, and in the fit-out of a friend's house in Wellington. 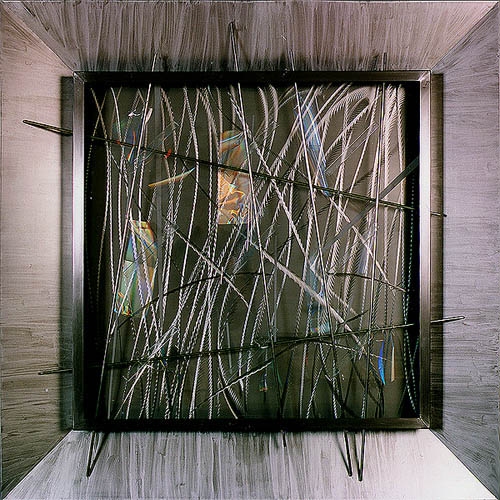 TXPQ Enjoy more of this good stuff from Gary Venter in Part 2.