Stef Dawson, known as Bloke on the Textpattern forums, is a weirdo. It's no wonder really considering the celebrities he hangs out with and the food he eats. Keep refreshing his home page and you can see him getting progressively weirder. Is there any hope for him? Probably not, he's too far gone. But don't be alarmed - rejoice instead! The world would be much sadder without this Bloke's outstanding creativity and sense of humour. And the world would also be deprived of a great new record release - read on and enjoy!

SD Having fun. If I wake up 10 straight days in a row and wish I didn't have to face each day, I'll go and do something different.

SD Interacting with people and learning something new every single day. Sounds cheesy but I love discovering stuff and finding out how the world and other people "tick". Helps me understand me better.

Oh alright, I made one of those up.

TXPQ What long-term aims or objectives have you?

TXPQ What short-term aims or objectives have you?

SD Avoid asinine alliteration at any and all ages. 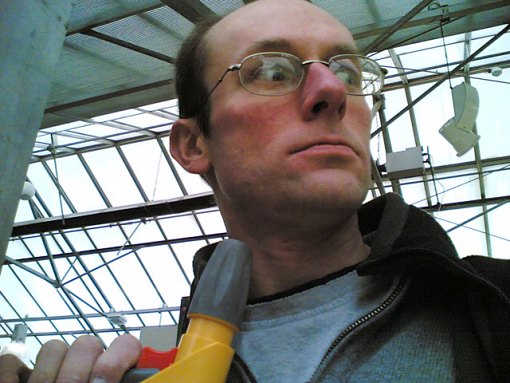 TXPQ Would you like to say anything about where you live (Coventry?)

SD I suspect it would alienate me from those that run the city and I have to endure it a little while longer yet. In my defence I can say "I'm not from round these parts". I'm a Southerner originally; whether that's deemed an improvement is debatable. From Kent if it means anything to anyone.

TXPQ What are some of your favourite things?

SD Music, my brain, my cats (Chas & Dave, natch) and my wife. Not necessarily in that order if you're reading this, honey :-)

TXPQ What about your favourite music?

SD That's a tough one. I like my music edgy, but appreciate anything if it's produced well and the energy of the band punch through the mix.

Past that, the style doesn't really matter. It could be dance, rap, hip hop, rock, punk, industrial, thrash, pop, blues, soul, or Romantic to name some genres for those that like pigeon-holing things. I can take or leave what most people cite as Classical, yet Romantic (like Rimsky Korsakov) is another thing entirely: wow, the Russians in the mid-late 1800s knew how to make evocative music, unlike the twee, formulaic twiddlings of the Mozart/Handel era before it. Can you tell I did Music A-Level for a while?

I do, however, draw the line at 99% of Freestyle Jazz for the simple reason it sounds as if 4 strangers have been ushered on stage, given instruments they've never seen before and told to get on with it.

Oh, and it somewhat pains me to admit I'm currently obsessed by the Britney record Piece of me. The production on that is razor sharp; listen to it in an acoustically treated environment like my recording studio. Stunning. I applaud the engineers and mastering team.

TXPQ What's Dissential all about?

SD The broad idea is it's a launchpad for new musical/videographical talent. If we spot anyone who has a story to tell, exudes talent, drive and the determination to self-promote through the web against the wash of drivel the corporate record industry flush to market, we'll do our level best to produce the stuff to world class standards, throw it out and build a fan base. I can't promise any more because I'm only human. Most days.

TXPQ What's Starstika all about? I see there's a new CD release and some nice Ajax on the website (in most browsers).

SD Starstika are a truth band trying to cut through the array of disinformation presented to us daily in the "news" and increasingly on the Internet. They take speeches and samples from all manner of folk (mainly politicians, shills or truth seekers) and put them to beats. They fold heavy, yet eerily funky and melodic, guitars into the mix. The albums are sort of "concepty" in nature and are an effort to make people think about what they see and hear around them every day.

The first album "International Anthem" sold 2 copies. And one of those was to my Mum. And I gave it to her. Thus, we figured, nobody cared about the truth, or hated the music. Or both. My mum said she liked it but I recognise she's biased.

Undeterred we embarked upon the 2nd album ("Net"), which kicks derriere and is finally out (after a few false promises), and have begun pre-production on a 3rd which, due to its subject matter, is set to be heavily influenced by the excellent Kraftwerk.

The dissential site will also be updated in the next month with mixes from their impending album "Full Force Vol.1". There, that's the shameless promotion out of the way. Next!

TXPQ That's only the half of it, folks! Read more about the Bloke's weird and wonderful world in Stef Dawson 2.

Commenting is closed for this article.